Eastbay is the perfect example of an idea finding its right time and place in history. From the day the EB38 was launched in 1993, it became a ‘classic’. The brand was immediately synonymous with speed and luxury – the very qualities that define it to this day. 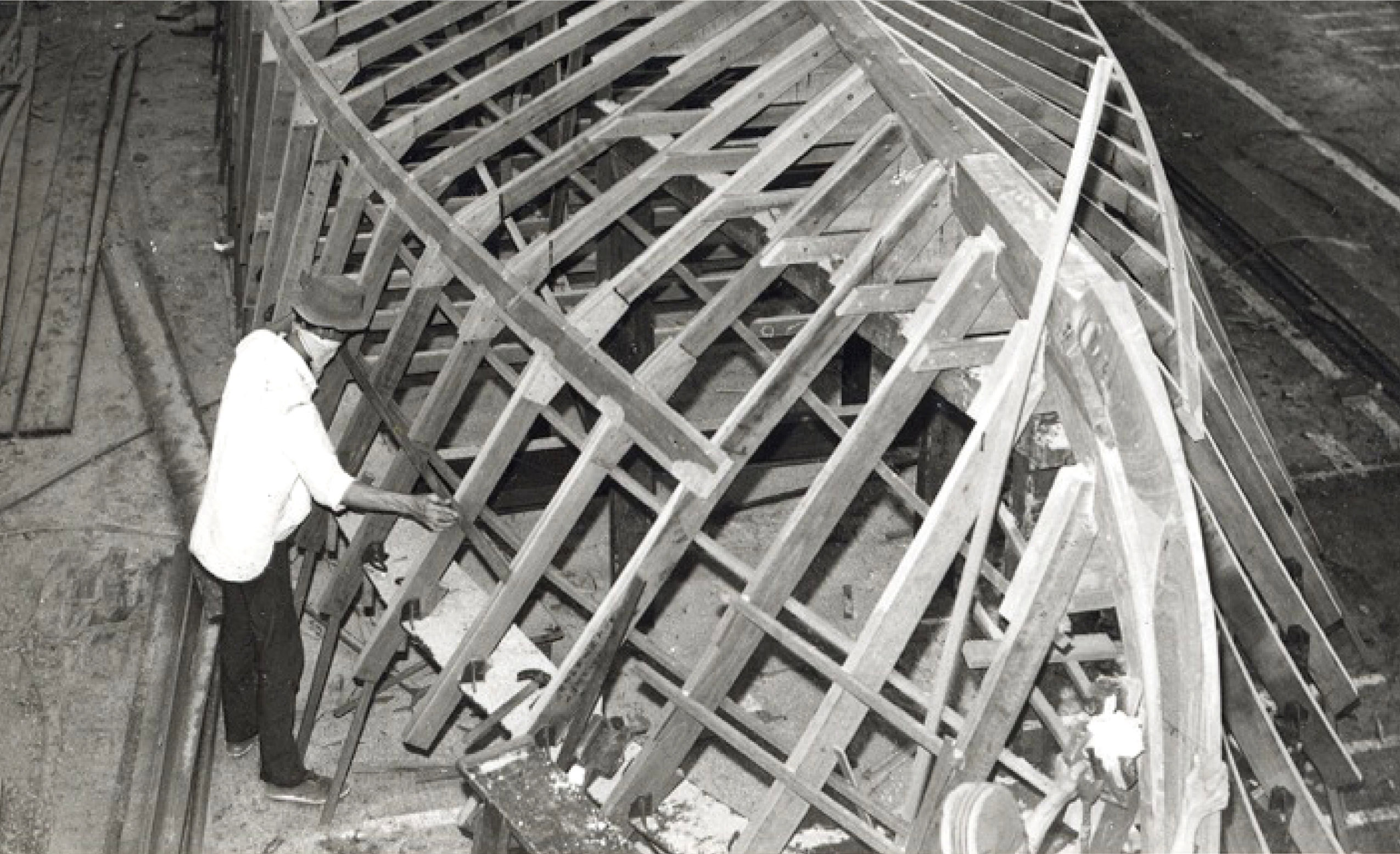 Our story begins with an unlikely character in somewhat unlikely circumstances.

Back in the early 1960s, Robert Newton was living in Hong Kong where he was the manager of Bireley’s soft drink bottling plant.

An American ex-patriot with no experience as a marine engineer or designer, Robert made the surprising decision to persuade his two sons – John and Whit – to embark on a life-changing venture. Together, they established a boat building yard on the empty lot where his company’s trucks were parked every night.

While this might appear to have been an impulsive, even irrational decision, it turned out to be a stroke of genius.

FROM VISION TO REALITY

By 1962 the company was flourishing and, under the name ‘American Marine’, Robert moved the enterprise to its first fully equipped yard in Junk Bay.

The company’s reputation for high quality sailboats and motor yachts grew quickly and attracted some true luminaries from the world of marine architecture – including Ray Hunt who went on to play a crucial role in the development of the Eastbay brand.

The launch of ‘Chantyman’ in 1963 proved to be a seminal moment in American Marine’s history and charted a new direction in product strategy. This 36ft, diesel-powered yacht had a raised pilot house, high bulwarks and softer lines. In turn, it inspired the development of ‘Spray’, designed by Kenneth Smith and widely accepted as being the prototype of an entirely new style of yacht – the finely built, 8 knot recreational trawler. 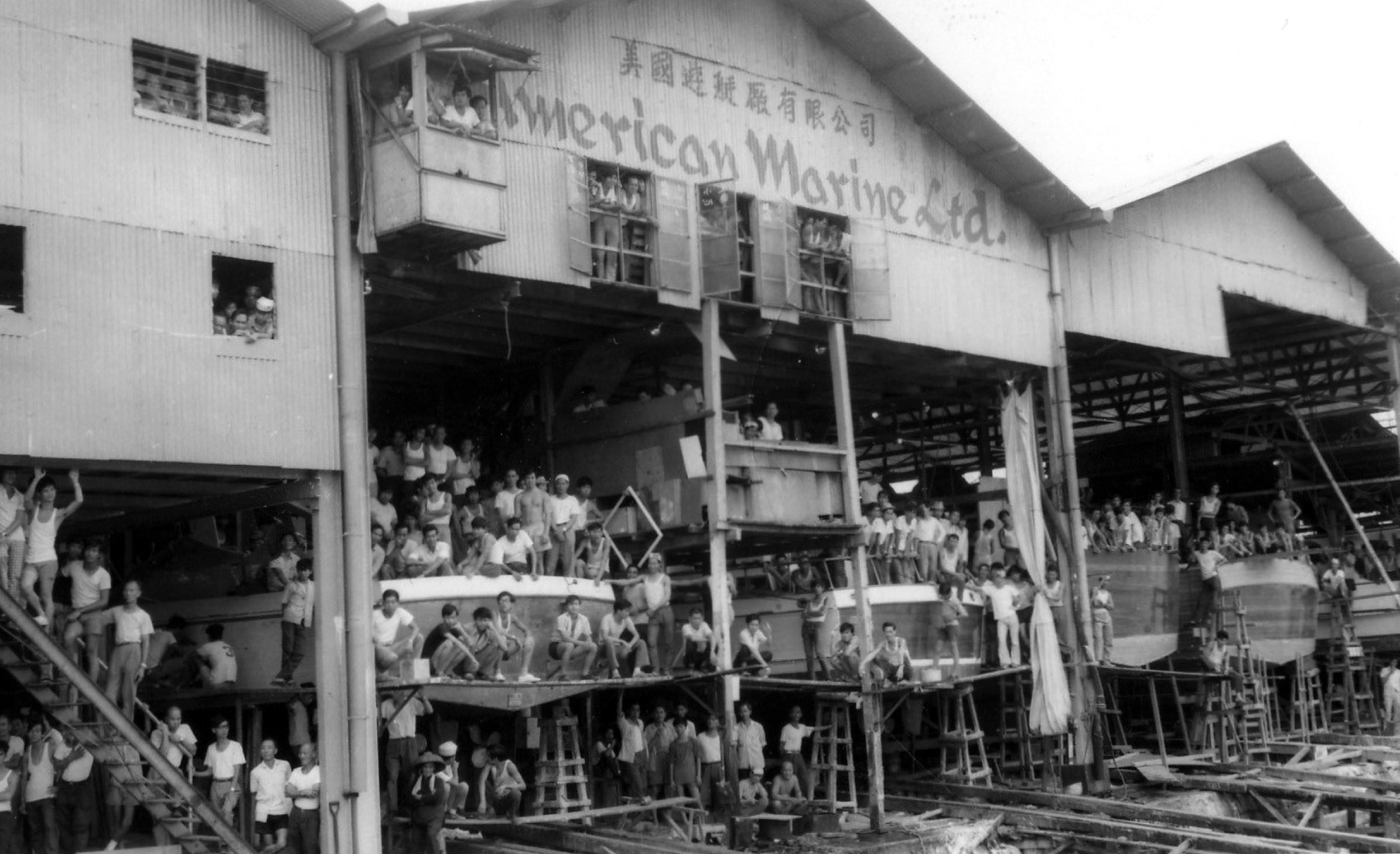 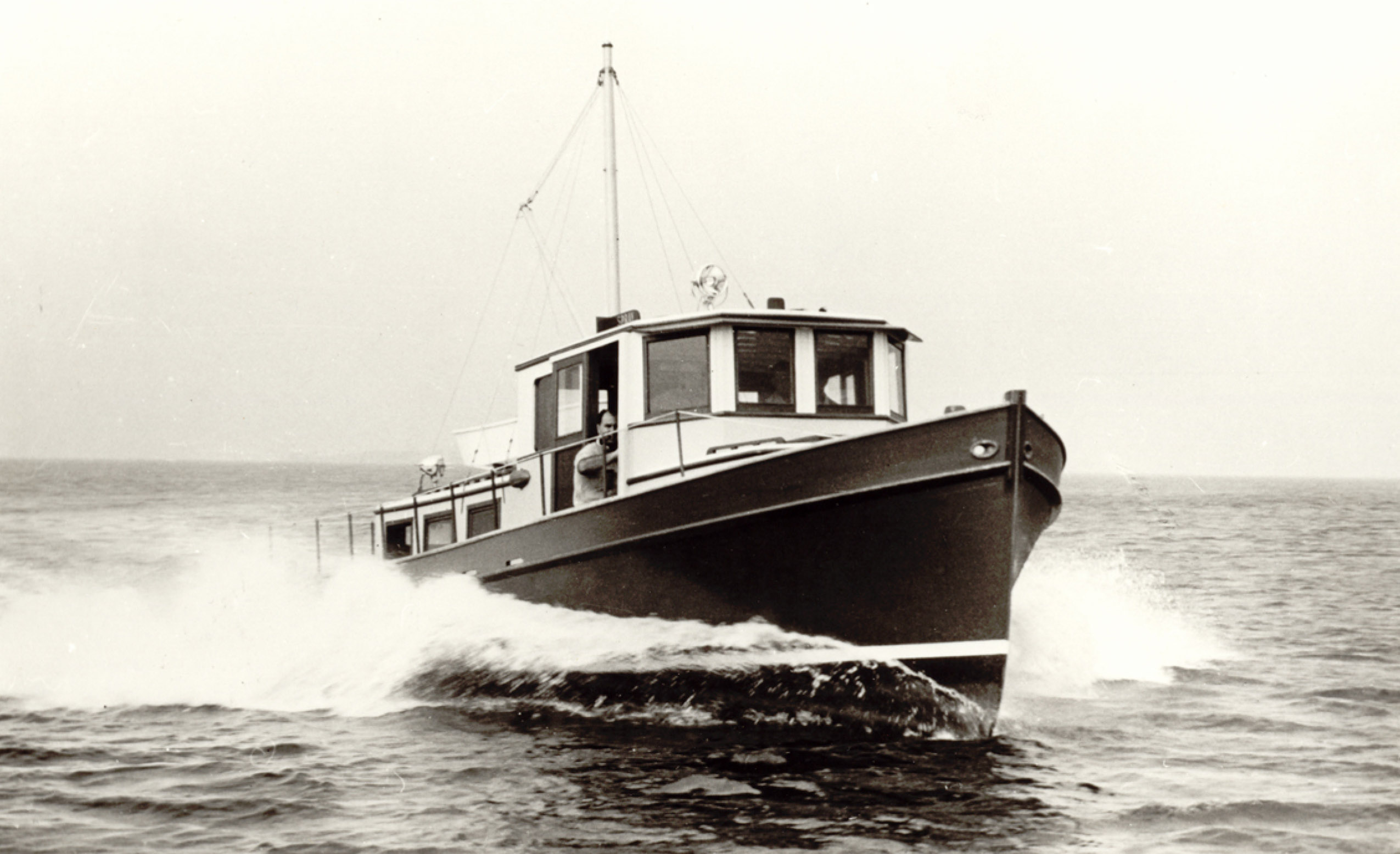 A STAR IS BORN!

‘Spray’ also ushered in a new brand name, one that is now a byword for luxury, quality and performance.

Over the next two to three decades, American Marine employed the Grand Banks brand to establish their reputation as the pioneers of highly refined, exquisitely crafted motor yachts. Over 1,100 GB36s went into production, a number only exceeded by the GB42 of which 1,560 were built.

It’s fair to say that the four models of the Grand Bank ‘Heritage Series’ (GB36, GB42, GB49 and GB32) created the trawler category within the recreational boating industry.

But while the success of Grand Banks continued unabated, the tide turned within the American economy and a new opportunity presented itself.

The early nineties saw the start of the ‘Dotcom’ boom and a proliferation of fast-growing, digital industries. With surprising speed, a new class of highly successful entrepreneurs emerged. They tended to be a little younger than the Grand Banks devotees. But, while no less affluent, they were also time poor.

This new breed of boat-lover was interested in speed. They wanted to get to their destination fast and in comfort, have room to relax and entertain while they were there, and then come home in a hurry.

Their prayers were answered in 1993 with the arrival of the EB38!

Now, with Mark appointed CEO of GB Marine Group, the combined expertise and experience of the extended team has led to a fundamental reinvention of our boats and our brand. 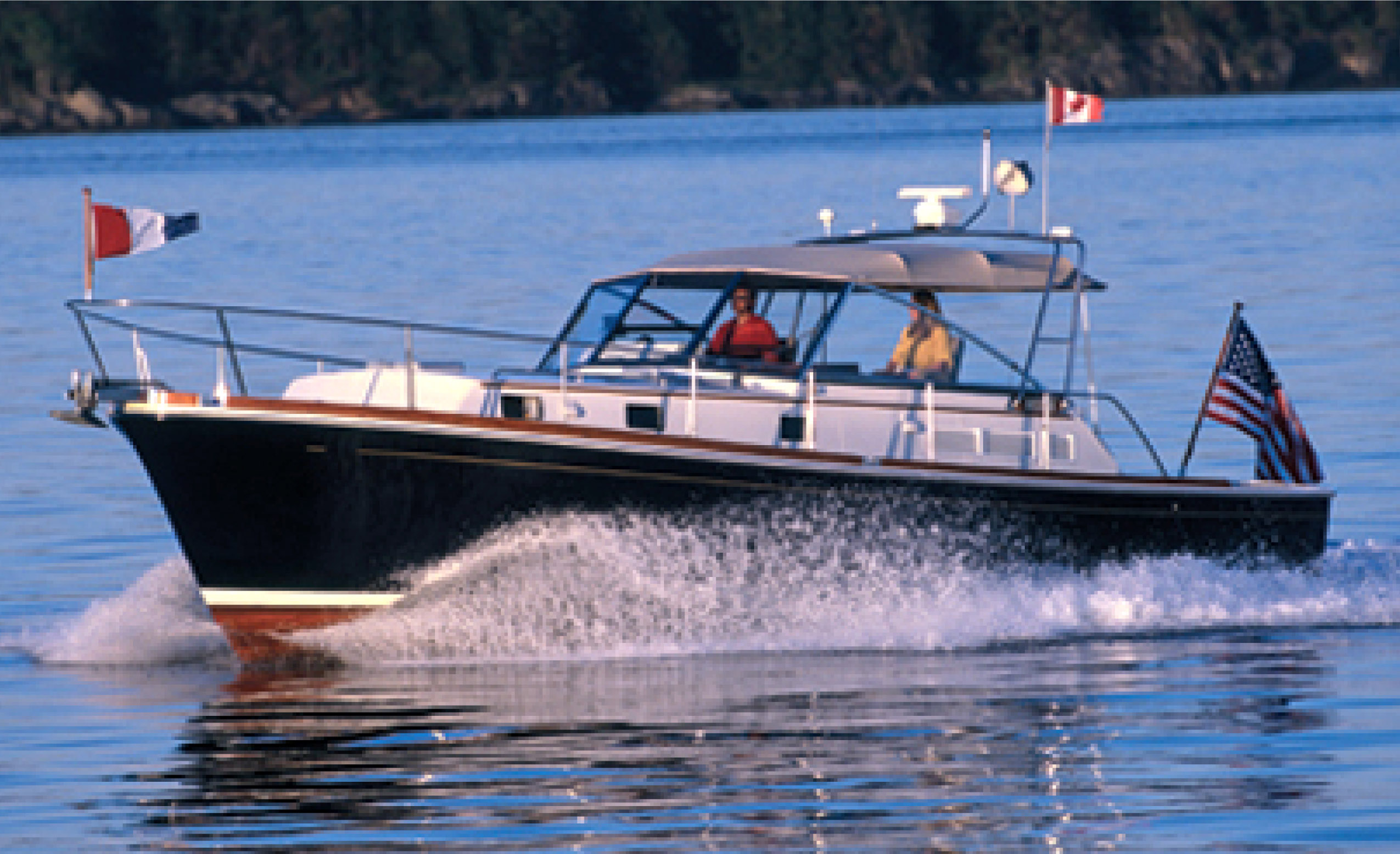 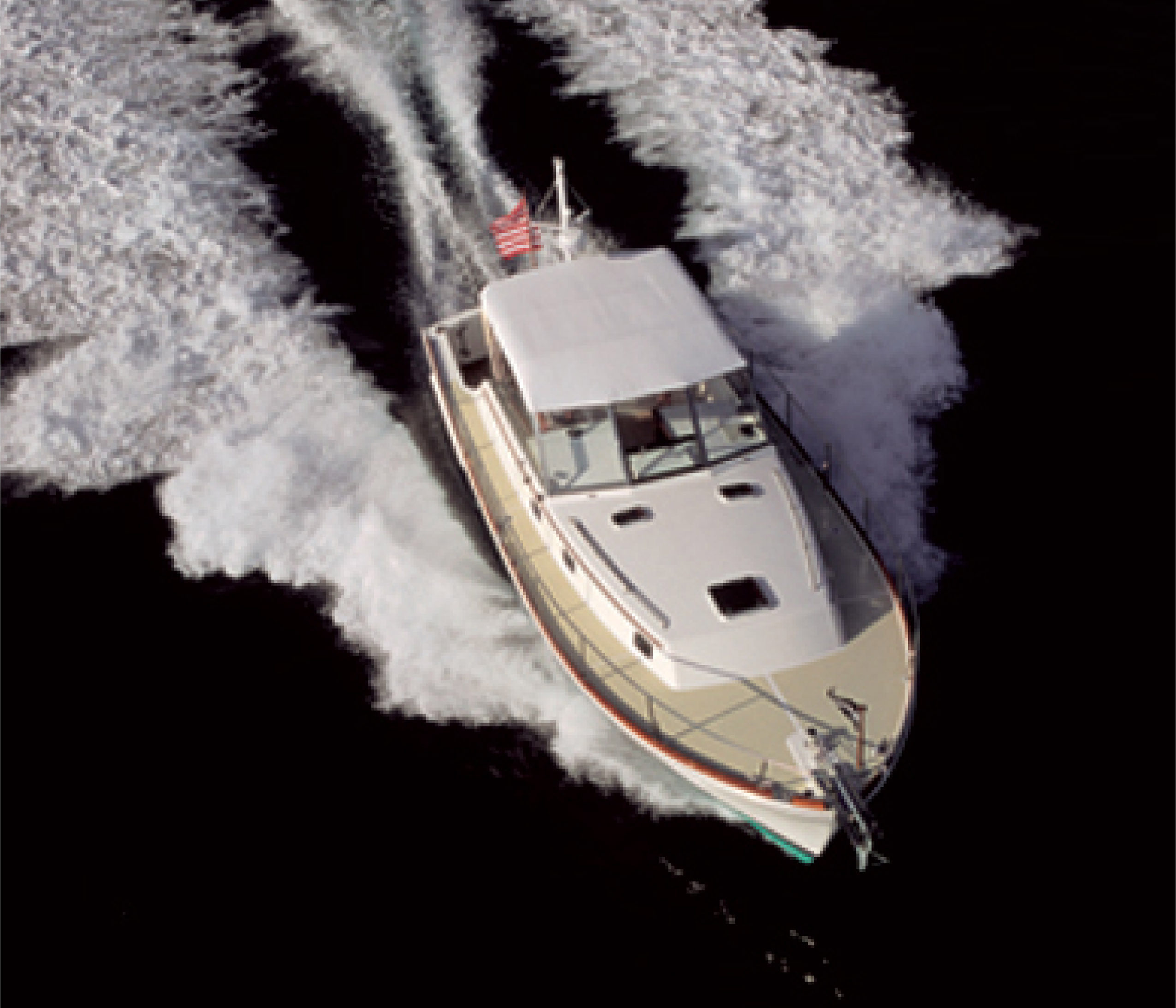 This brainchild of Marketing Chief Dick Lowe and his son Rick was the first production-line ‘Downeaster’ and displayed a set of irresistible attributes. First and foremost, speed. The EB38 was capable of cruising at 24 plus knots.

The C. Raymond Hunt hull was renowned for its seakeeping abilities – tracking well in waves and slop, it offered comfort and stability in challenging conditions. Its broad beam created ample internal space for onboard living and storage for extended excursions.

The exceptional build quality was endorsed by the relationship with Grand Banks – Eastbay was built in the same factory and to the same exacting standards as its iconic predecessor.

The style of the boat was immensely appealing. Owing a strand of its DNA to the lobster boats of Maine, the sweeping sheer line combined with the rectilinear deckhouse geometry also found favor with hard-core yachtsmen who were looking for a faster motor yacht than could be found in the trawler category.

This combination of virtues was extended to a range of EB models over the following years. (You can see examples on our ‘heritage’ page.) Most notably, the EB49 was a phenomenal success and sold an astounding 31 units at the Miami boat show at the time of its release.

THE LEGEND LIVES ON.

The pioneering spirit that led to the development of the first Eastbays has never waned.

Today, the EB44 and the EB60 are built in the GB Marine Group’s state-of-the-art factory where we employ only the finest materials and utilize cutting-edge technology that is enhanced by traditional handcraftsmanship.

The ’44 is our ‘heritage’ model and pays homage to the classic style or the early Eastbays. Built on a C. Raymond Hunt Deep-V hull, it captures the opulence and style of those early years but is engineered with the most contemporary techniques and innovations.

The ’60 is our evolution model and presents the essence of Eastbay in a form that has been refined by constant experimentation over the last decade. Built on our proprietary V-Warp hull, it takes one of the defining qualities of this brand – speed – to a new level while retaining its character of style and functional luxury.

Needless to say, other models are on the drawing board as we eagerly return the brand to its rightful place in the company of the all-time greats. 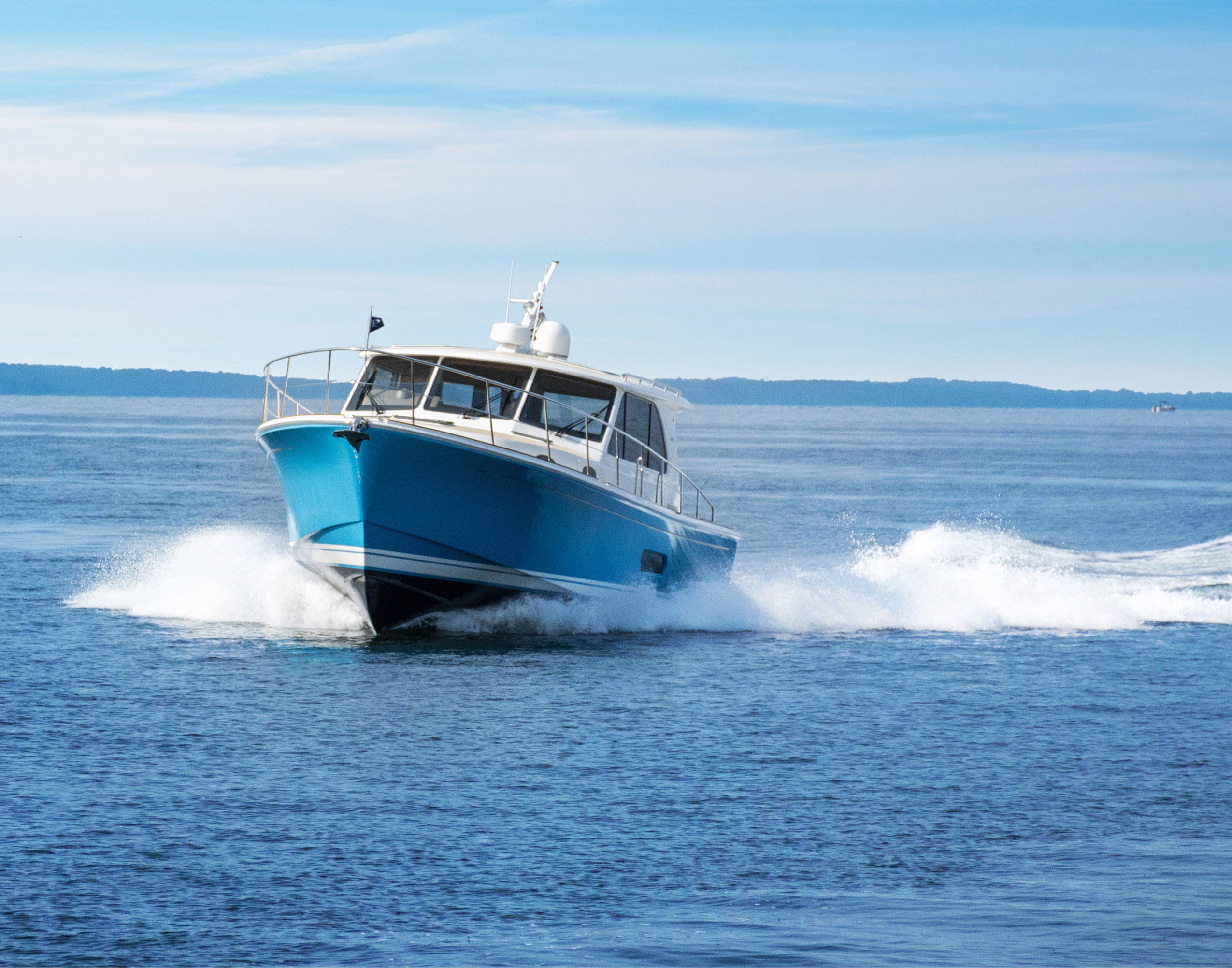 LEADING FROM THE FRONT

SINCE OCEAN-RACING CHAMPION, MARK RICHARDS, BECAME CEO OF OUR COMPANY IN 2014, THE GB MARINE GROUP HAS BEEN DRIVEN TO ATTAIN THE HIGHEST STANDARDS OF DESIGN, PERFORMANCE, ENGINEERING AND CRAFTSMANSHIP. 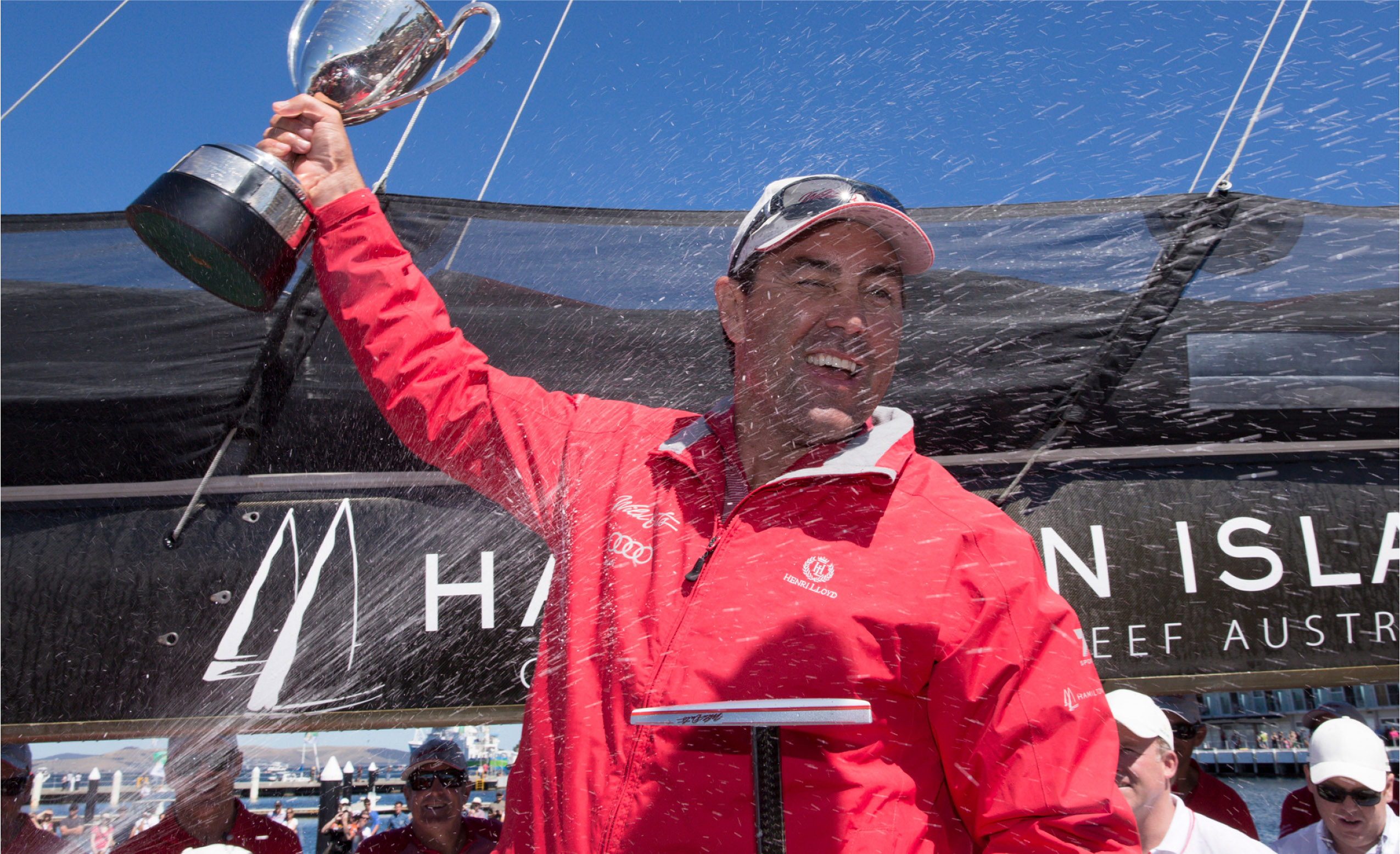 A STRAND OF RACING DNA

Back in the late 90s, Mark first collaborated with Australian businessman, Bob Oatley, to develop a series of 60ft racing yachts. This collaboration led to a series of championship trophies and ultimately to the development of the legendary Wild Oats XI. This 100ft maxi yacht was completed only two weeks before the 2005 Rolex Sydney to Hobart yacht race and yet went on to win the ‘treble’ – line honours, handicap and race record.

And that was just the start of her story. Since then, Mark has skippered Wild Oats XI to victory a further eight times, winning the Treble a second time and repeatedly breaking all records in this most gruelling of races.

It would be easy to attribute this success to a combination of boat design, crew capability and good decision making on the part of the captain. But there is another element.

On one occasion, when Wild Oats had fallen short at the finishing line, Mark and his team cut the boat in half with chain saws. Literally. They then extended the hull’s length, fused it back together and returned to their winning streak.

That combination of innovation and design is one of our core values. It drives our restless determination to find better solutions to the challenge of building the most efficient, luxurious and stylish motor yachts you’ll see in any marina.

Many thanks to Andrea Francolini for the images of Wild Oats XI. 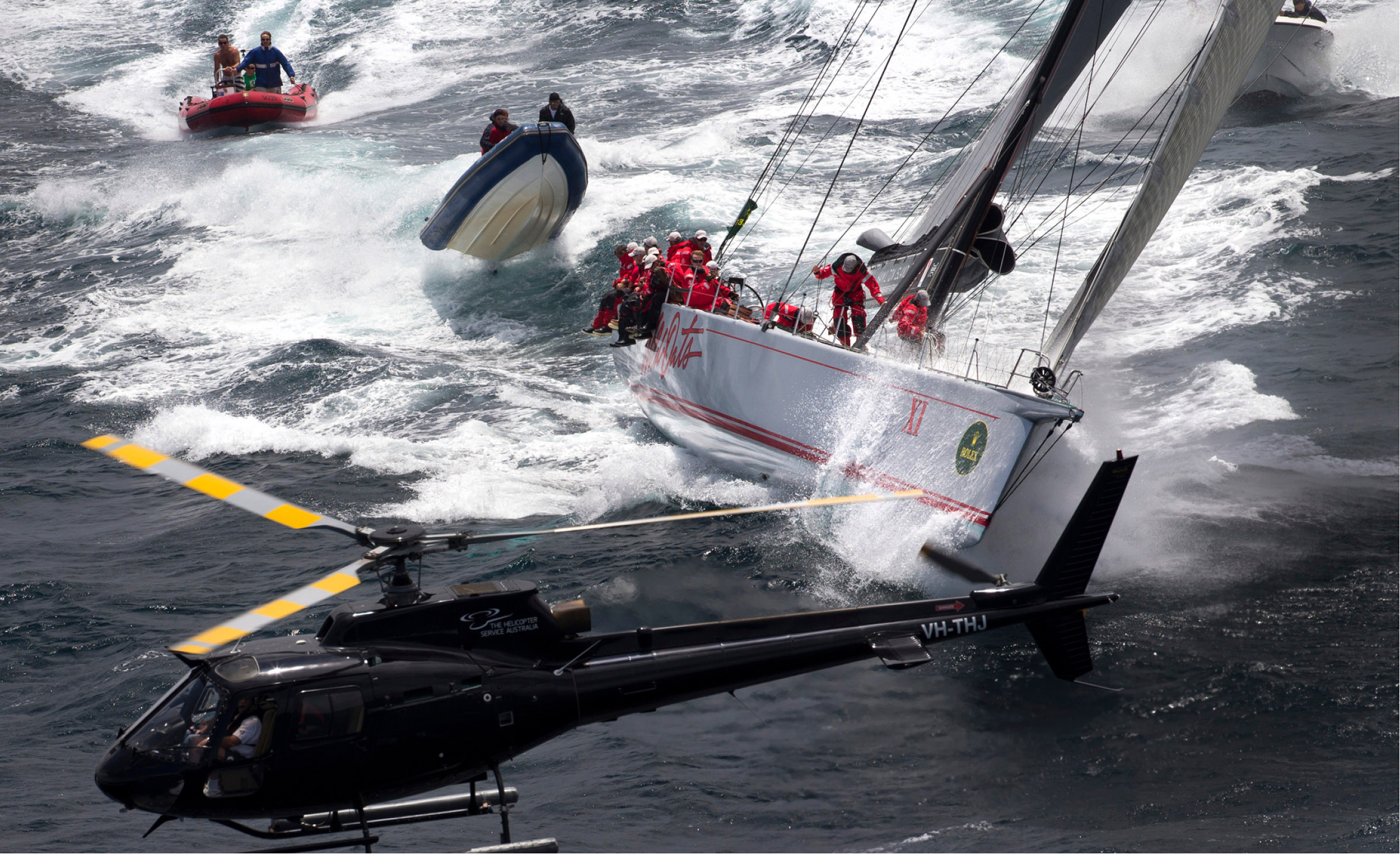 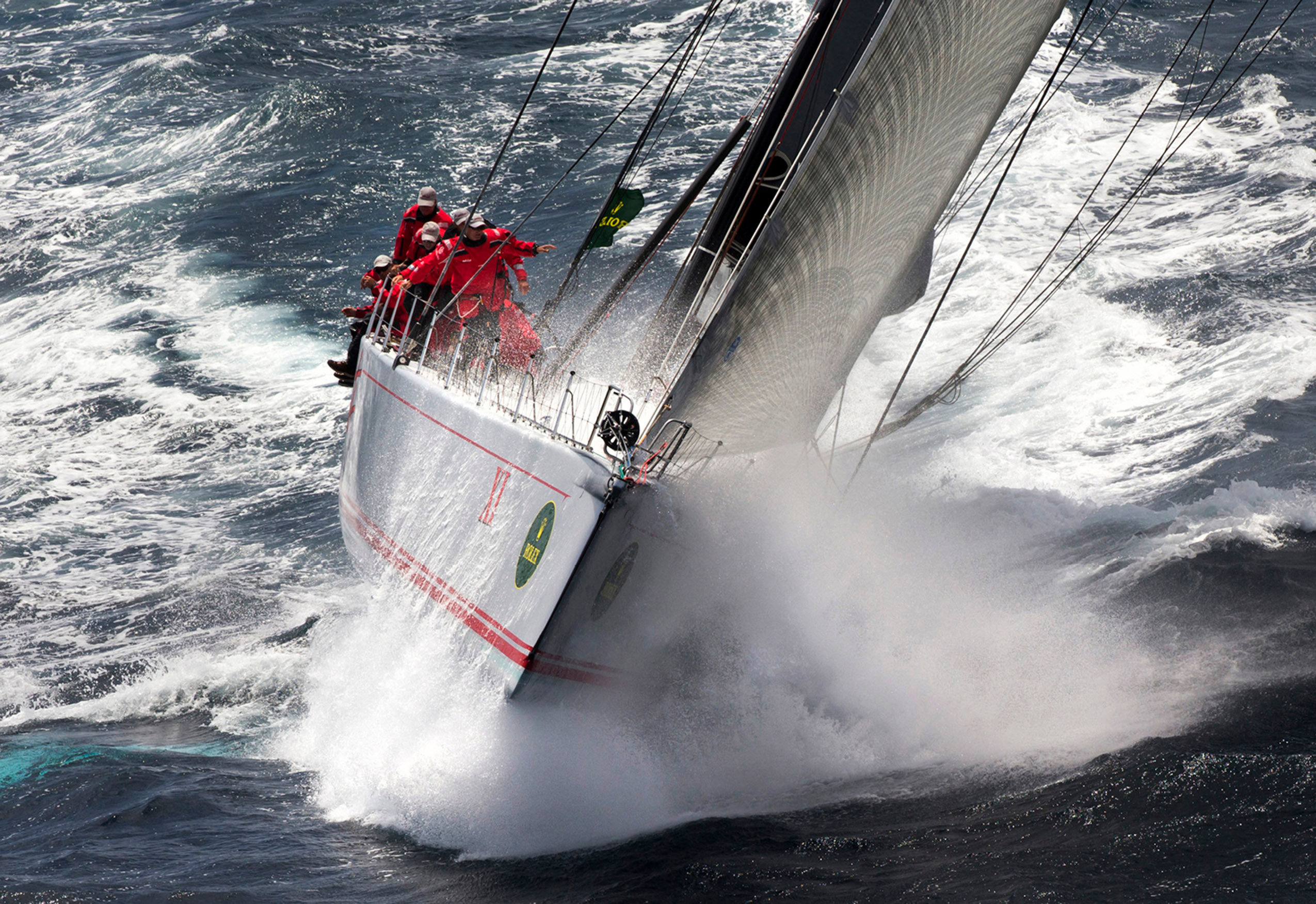 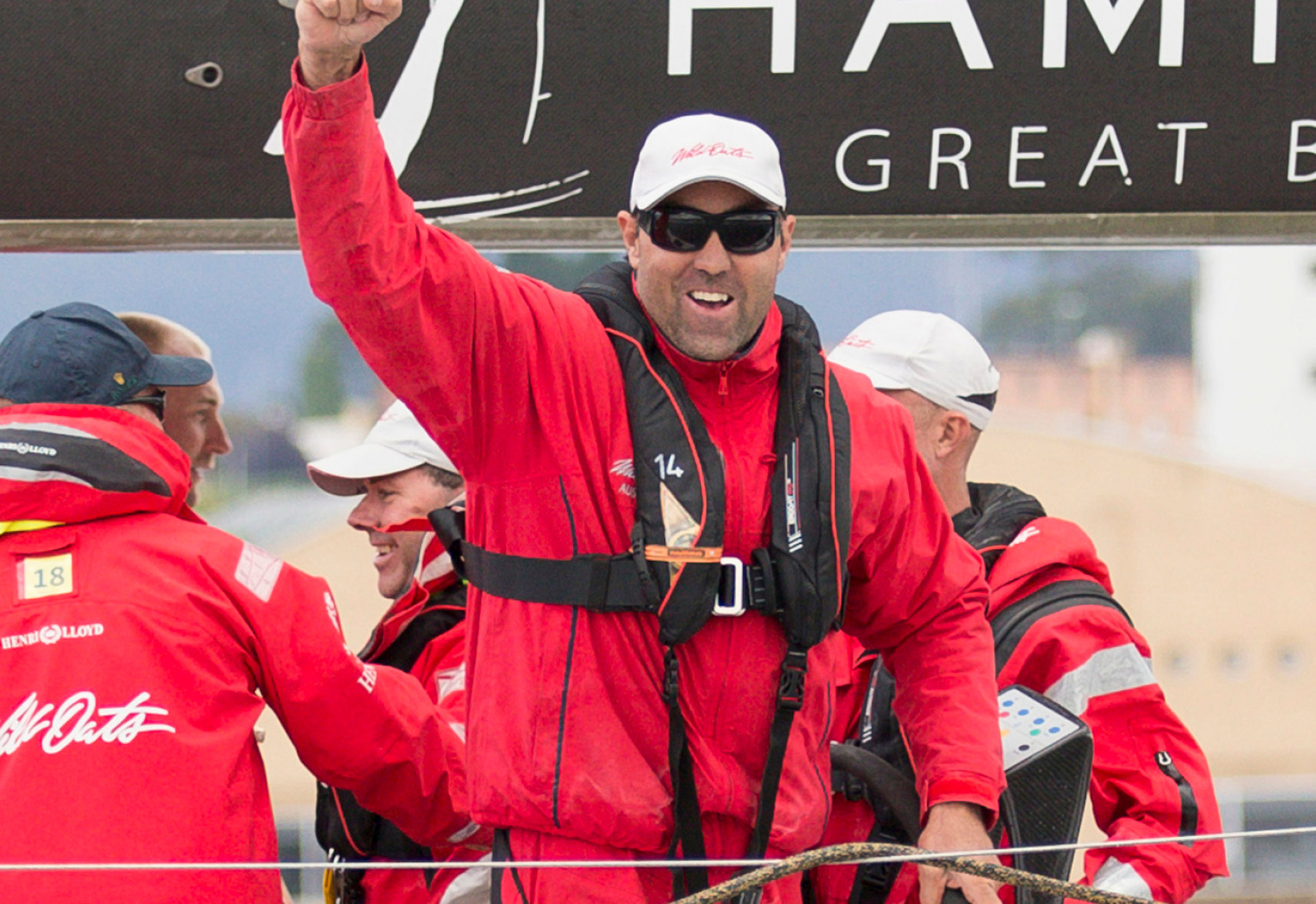 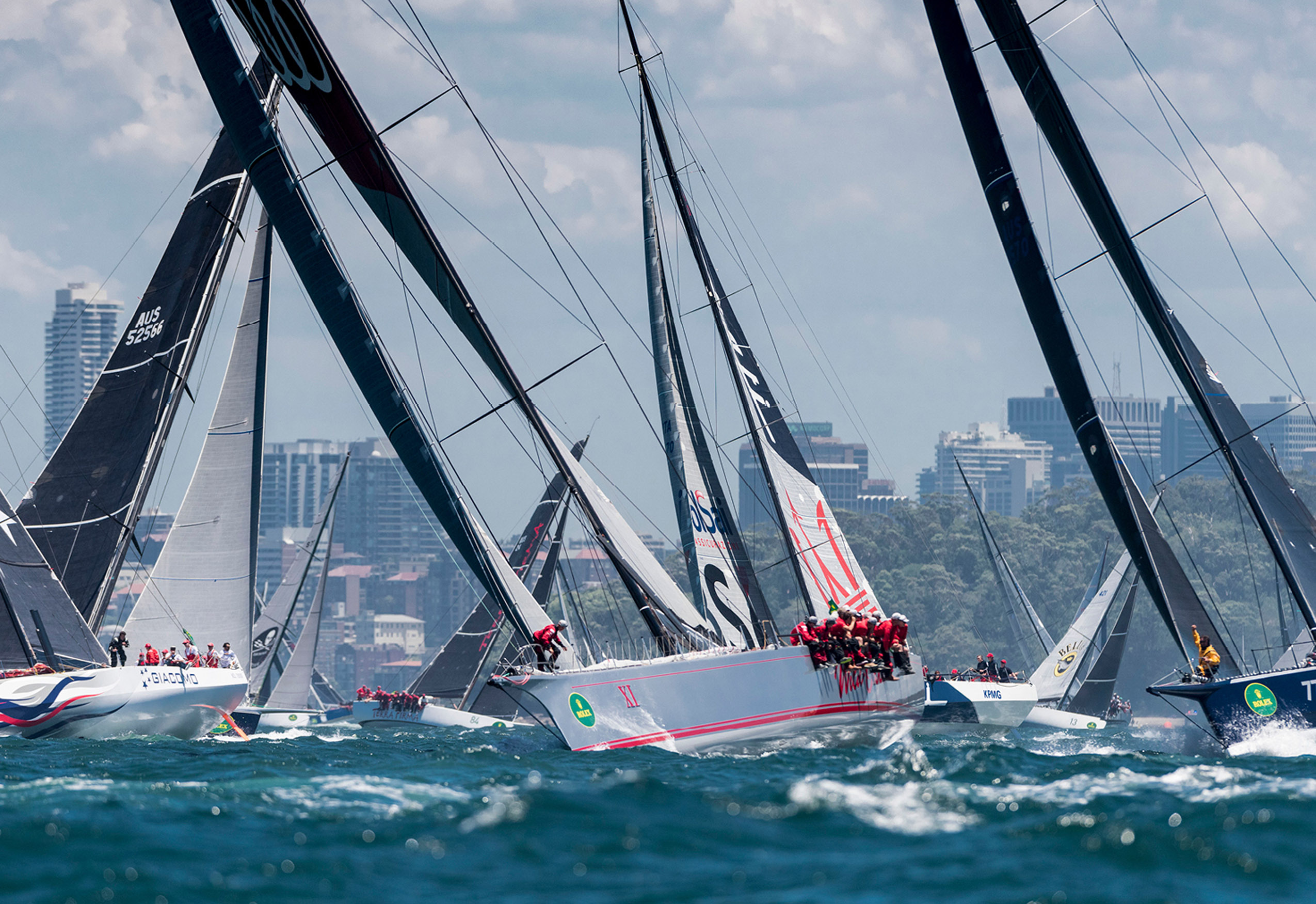 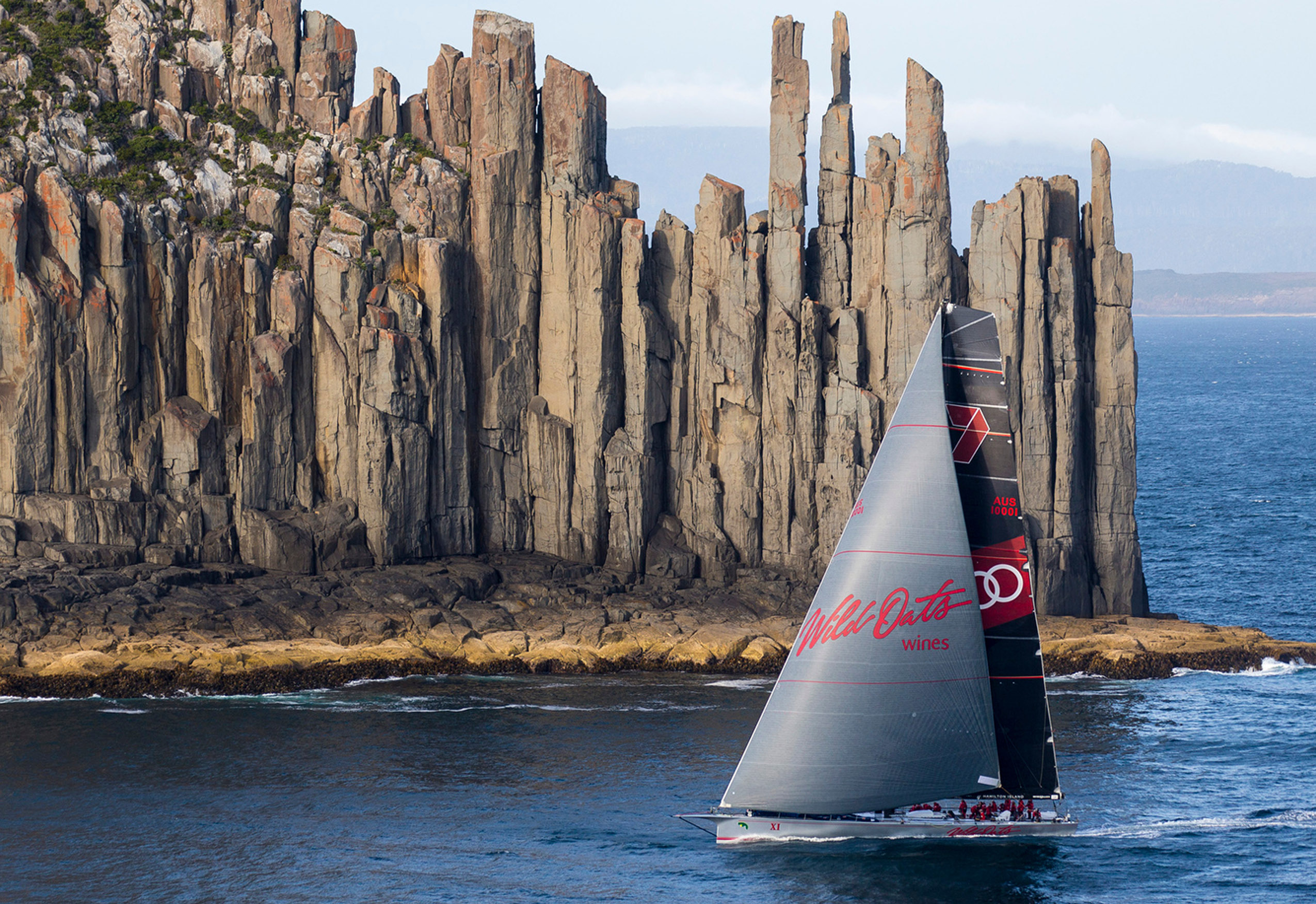 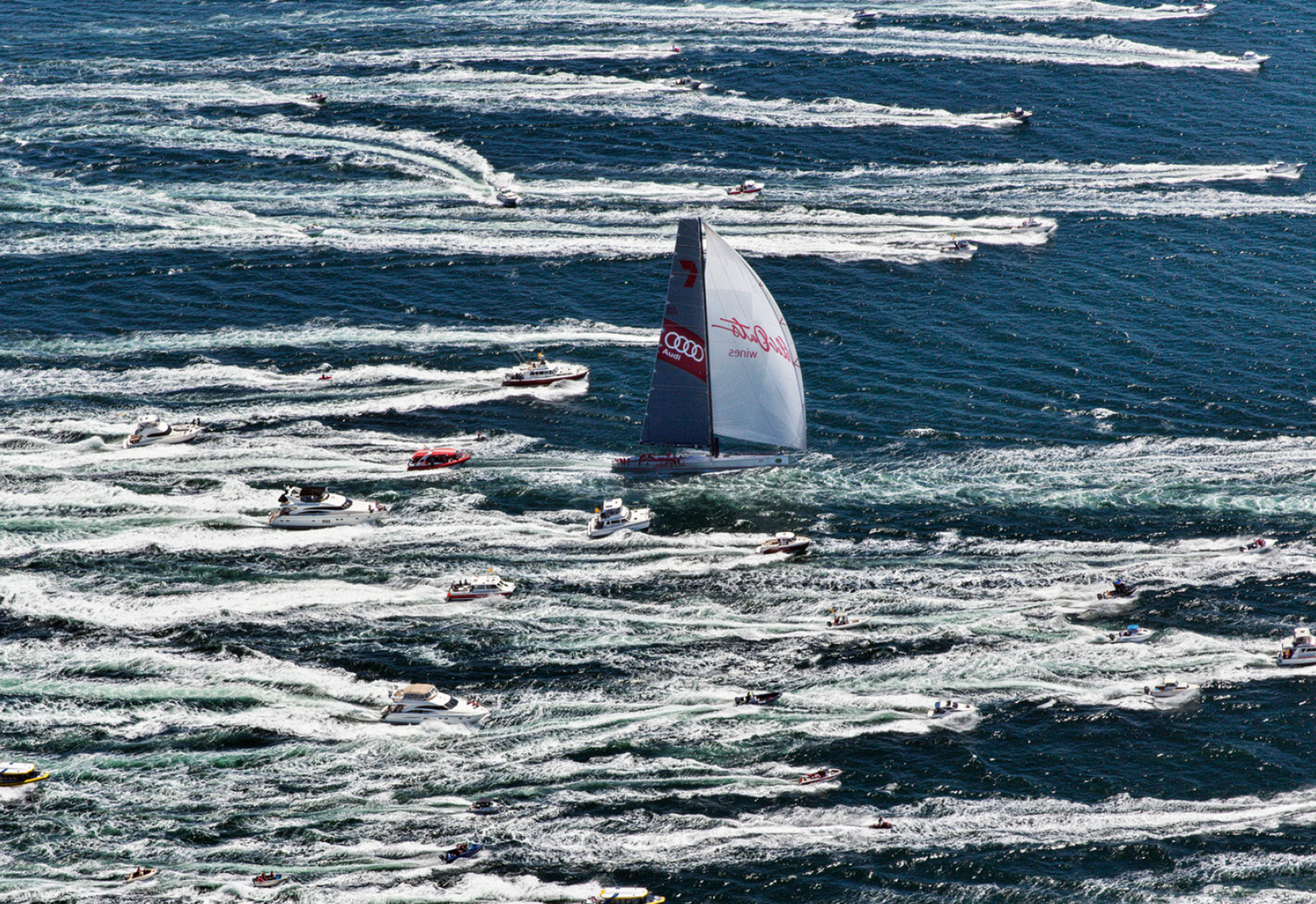 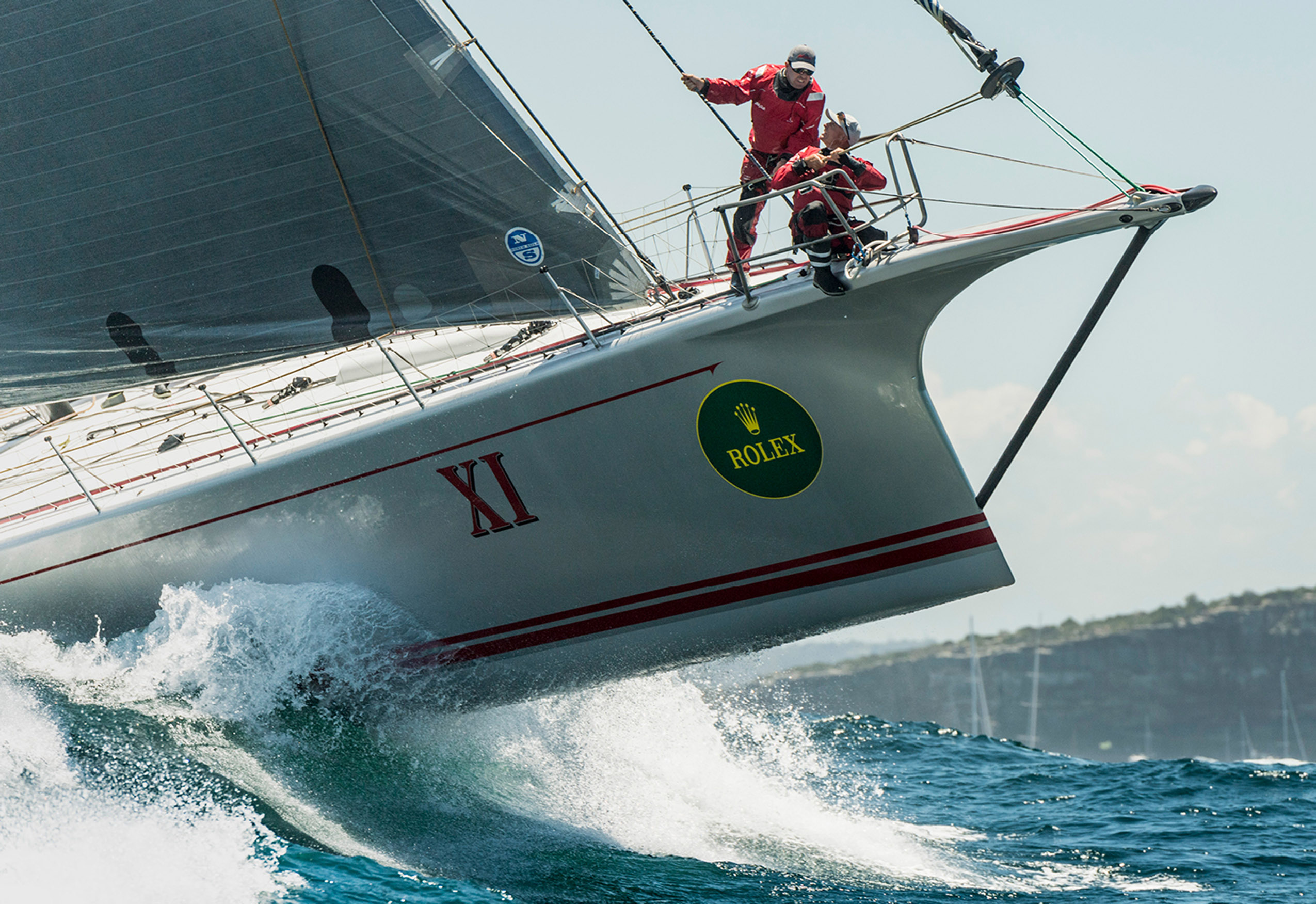